Increased adoption and access to CBDCs is the next step for central banks to push greater use of digital payments. This is an opportunity which countries in Asia Pacific are looking to tap by establishing the necessary governance frameworks.

Businesses worldwide have adapted to remote working as a result of pandemic-induced national lockdowns. One noticeable consequence of this new style of working has been a shift towards the digital world. As many industries experience this digital shift, central banks have began to follow suit through the development of central bank digital currencies (CBDCs). However, not all digital currencies are created equal and it is already clear which countries are leading the charge.

Asia Pacific (APAC) countries are leading by example when it comes to embracing new technology. These countries have drawn global attention due to their innovative applications of cutting-edge technology. APAC’s success with CBDCs is a prime example. Countries which have historically been at the forefront of currency developments, such as the US and the UK are no longer leading the charge. Desire to protect long-standing currencies has led to a ‘regulation first’ not ‘innovation first’ approach for many.

The US Fed, the Bank of England, the Bank of Japan and the European Central Bank are all currently exploring the technology. Meanwhile, the Bank for International Settlements (BIS), the so-called “central banks’ central bank” has been discussing CBDCs at length.

So why are central banks, the heart of the economic establishment, so interested in technology with such radical and revolutionary roots?

In part, they are responding to challenges from private sector initiatives such as Facebook’s Diem. However, CBDCs also suggest substantial benefits for general purpose use which make them highly attractive in their own right. Specifically, central banks’ motivations include, providing a cash alternative, promoting financial inclusion, increasing seigniorage profit (difference between a currency’s face value and the cost of its production and distribution), implementing monetary policy, linking payments to identity, and modernising payments for a digital economy.

What’s interesting about the recent models is the collaborative approach which many are taking with a supporting cast from the private sector. For example, the Bank of England has been researching what it calls the ‘platform model’, in which the bank is the only entity allowed to create or destroy a token, while leaving ‘payment interface providers’ (PIPs) to interact with end-users.

Others have gone a step further. Researchers at the International Monetary Fund (IMF) have coined the term ‘synthetic CBDC’ (sCBDC) to describe a model in which a non-central bank entity, such as a commercial bank, can issue a stablecoin backed by central bank reserves.

Ultimately, it is likely that a variety of uses for CBDCs in the retail space and a number of different implementations will develop. These will have important benefits for a wide variety of institutions from corporate treasury departments to payment networks open to the general public.

The distinction is quickly blurring between the currently evolving retail CBDC models and previous projects with wholesale CBDCs. A CBDC is a great tool at the wholesale level, and its applications teach us about the prospects for retail CBDCs.

Project Ubin with the Monetary Authority of Singapore (MAS) taught us that a blockchain-enabled CBDC supports more efficient complex payment workflows, including a decentralised liquidity savings mechanism. Now, the MAS is partnering with the BIS Innovation Hub and the central banking community on Project Dunbar, an initiative to design, develop and test new multi-CBDC models.

Project Inthanon with the Bank of Thailand and Hong Kong Monetary Authority taught us that a blockchain CBDC allows for a cross-border corridor, enabled foreign exchange (FX) price discovery, and facilitated atomic payment versus payment (PvP).

Blockchain is crucial in enabling the tokenisation of these payment assets, allowing for peer-to-peer transactions and distributed custody. Additionally, blockchain enables atomic transactions which means that any delivery versus payment (DvP) or PvP scenario can occur in real-time without risk that one leg of the transaction will execute before the other.

Blockchain also sets the architecture for a more secure payment system in which there is no centralised point of failure nor honeypot for hackers to attack. Finally, it allows connectivity into a growing tokenised financial ecosystem with global integrity.

Looking forward, it is possible to envisage an entirely new payment structure. The way banks, businesses and individuals handle, exchange and process money will be re-imagined. This architecture is empowered by blockchain as a means of keeping records, but relies on central banks’ diligence in providing robust governance frameworks for these new assets.

In order for central banks to fulfil their mandate of offering digital payment solutions fit for the rapidly evolving modern world, their first step must be to increase the adoption and accessibility of CBDCs. This will help create a more connected global financial industry, and encourage technology-driven innovation in non-payments-related areas.

APAC’s CBDC success speaks for itself. If the rest of the world takes one lesson from Asia’s example, it is that innovation must come first when creating the currencies of the future.

Amit Ghosh is the head of Asia Pacific at R3, an enterprise blockchain firm. 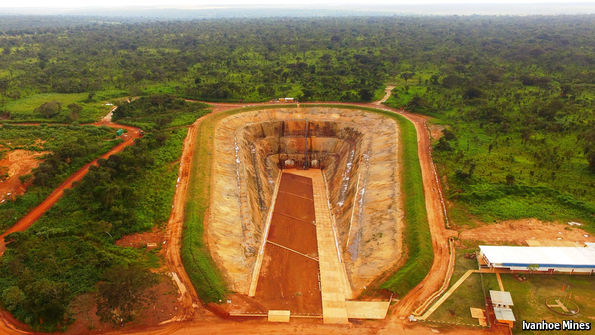 Mining companies have dug themselves out of a hole

FOR mining investors there is something sinfully alluring about Glencore, an Anglo-Swiss metals…